1.. Which address is used in the Address field of a PPP frame?

2. How does PPP interface with different network layer protocols?

3.  Match the PPP option with the correct description. (Not all options are used.)

4. Which command can be used to view the cable type that is attached to a serial interface?

5. In which situation would the use of PAP be preferable to the use of CHAP?

6. Which protocol will terminate the PPP link after the exchange of data is complete? 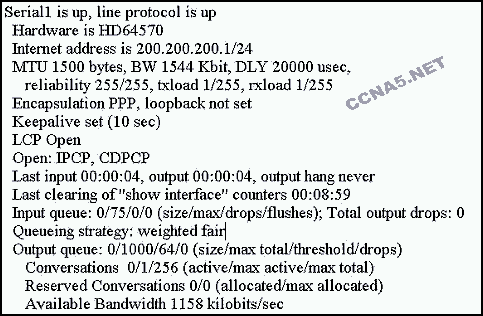 Refer to the exhibit. Which statement describes the status of the PPP connection?

8. Which is an advantage of using PPP on a serial link instead of HDLC?

9. Which three statements are true about PPP? (Choose three.)

PPP can use synchronous and asynchronous circuits.*
PPP carries packets from several network layer protocols in LCPs.
PPP can only be used between two Cisco devices.
PPP uses LCPs to agree on format options such as authentication, compression, and error detection.*
PPP uses LCPs to establish, configure, and test the data link connection.*

10. When configuring Multilink PPP, where is the IP address for the multilink bundle configured?

11. Which field marks the beginning and end of an HDLC frame? 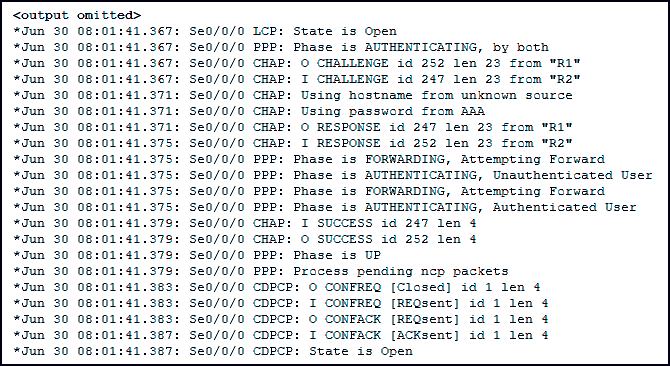 Refer to the exhibit. Based on the debug command output that is shown, which statement is true of the operation of PPP.

13. During a PPP session establishment phase, which two messages are sent by the requested party if the options are not acceptable? (Choose two.)

15. Match the steps to the PPP CHAP authentication process sequence. (Not all options are used.)

Place the options in the following order:
Step 3 -> calculate the MD5 hash
Step 2 -> calculate the ID and random number
Step 4 -> send challenge ID, hash, and username
Step 1 -> use LCP to negotiate the type of authentication
– not scored –
Step 5 -> calculate the hash based on received information
Step 6 -> compare the received hash with the calculated hash

16. What are three components of PPP? (Choose three.) 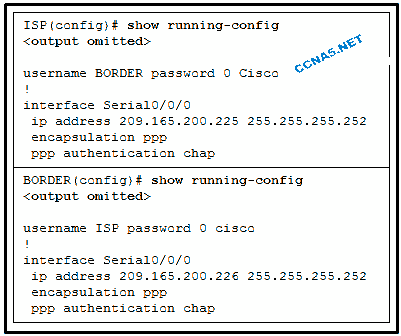 Refer to the exhibit. A network administrator is configuring the PPP link between the two routers. However, the PPP link cannot be established. Based on the partial output of the show running-config command, what is the cause of the problem?​

18. Which PPP option can detect links that are in a looped-back condition?

19. Which three are types of LCP frames used with PPP? (Choose three.)

20. At which layer of the OSI model does multiplexing take place?

21. Match the phases of establishing a PPP session in the correct order. (Not all options are used.)

Place the options in the following order:
Phase 3  -> negotiate with the network layer to configure L3 protocol
– not scored –
Phase 1  -> establish the link and negotiate configuration options
Phase 2 -> determine the quality of the link 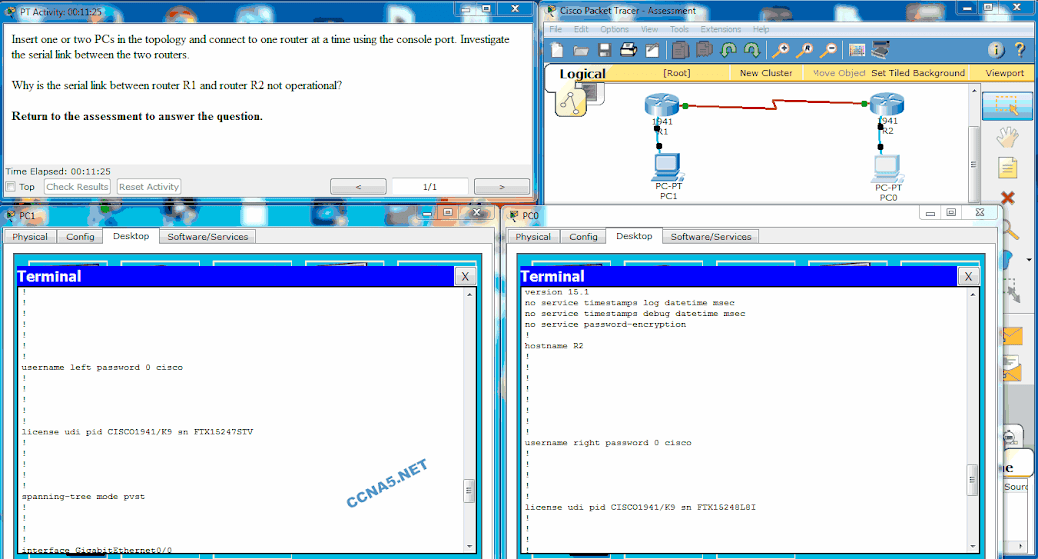 Open the PT Activity. Perform the tasks in the activity instructions and then answer the question.
Why is the serial link between router R1 and router R2 not operational?

24. Which serial 0/0/0 interface state will be shown if no serial cable is attached to the router, but everything else has been correctly configured and turned on?

25. What PPP information will be displayed if a network engineer issues the show ppp multilink command on Cisco router?
the IP addresses of the link interfaces
the serial interfaces participating in the multilink*
the queuing type on the link
the link LCP and NCP status

26. Refer to the exhibit. What type of Layer 2 encapsulation will be used for connection D on the basis of this configuration on a newly installed router:

27.  A network engineer is monitoring an essential, but poor quality, PPP WAN link that periodically shuts down. An examination of the interface configurations shows that the ppp quality 90 command has been issued. What action could the engineer take to reduce the frequency with which the link shuts down?

28. A network engineer is troubleshooting the loss of MPEG video viewing quality as MPEG video files cross a PPP WAN link. What could be causing this loss of quality?